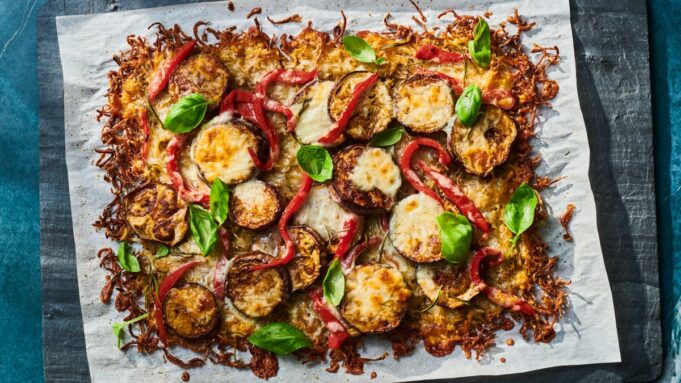 1. Preheat oven to 475°F. Place bell peppers on a baking sheet and roast till they’re absolutely softened, about quarter-hour.

2. Take away peppers and instantly place in a bowl. Cowl the highest of the bowl with plastic wrap and let stand about quarter-hour, till peppers are cool sufficient to deal with. As soon as cooled, use your fingers to slide off skins and take away seeds and stems. Lower peppers into 1-inch-thick strips and put aside.

3. In the meantime, line a baking sheet with parchment paper or flippantly mist with cooking spray. Place eggplant on a baking sheet, scale back oven temperature to 375°F, and roast on middle rack till tender and golden brown, about 20 minutes. Put aside.

5. Line a separate baking sheet with parchment paper or flippantly mist with cooking spray. Working with 1 handful at a time, squeeze extra water from potatoes and place on a clear kitchen towel. Roll up towel; bend and wring any remaining moisture from potatoes. Return to a big bowl and add salt, then toss to mix. Unfold potatoes on the ready baking sheet, making a layer about ⅛-inch thick with about an inch hole between the sting of the potatoes and the rim of the baking sheet. Bake at 375°F till potatoes are tender however not but browning, about 20 minutes. If baking potatoes similtaneously eggplant, place a baking sheet with potatoes on backside rack in oven.

6. Take away potato layer from oven and high with eggplant, sliced peppers, and cheese. Sprinkle rosemary and oregano over cheese and return to oven and bake till cheese is melted and edges are deeply browned, about 20 minutes.

7. As soon as baked potato crust is faraway from oven, high with peppers, eggplant, and mozzarella. Then sprinkle rosemary and oregano over high of mozzarella. Bake for 20 extra minutes, till golden brown. Use a metallic spatula to slice and serve pizza instantly.

Best Trader Joe’s Food and Recipe Hacks, According to Employees

TikTok gets the party started with these fun summer dips